Please fill in the form for THREE FREE chapters

(YES, THREE!!) of my book AS WELL AS the bonus 2-hour tele-class
"How to Keep The Attraction Alive After You Get Your EUM to Step Up Or Your Ex Back": 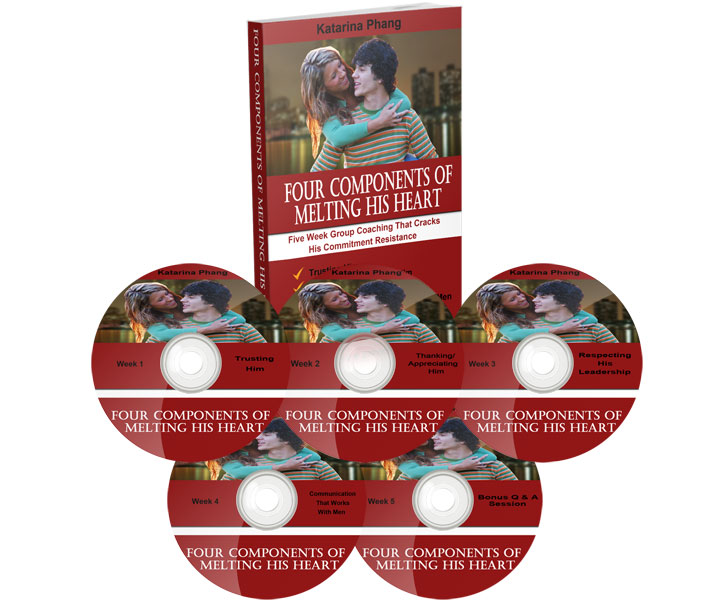 With a bonus interview: "The Goddess Road to Engagement" and a bonus class: “7 Reasons Why Men Marry Some Women And Dump Some Others”
$499
Add To Cart

Module 2 Understanding Men and Four Components of Melting His Heart

The latest version of the program that is part of the Feminine Magnetism Group Coaching with a bonus class: “7 Reasons Why Men Marry Some Women And Dump Some Others”
$499
Add To Cart

Melissa found me only barely three months ago and she signed up for all my programs. In a few weeks, not only she got back together with her EUM but he also claimed her! She is now signing up for the Leaning Back Workshop so you can ask questions and learn from her if you sign up as well. (UPDATE: they just had a baby son and engaged a day after she gave birth to their baby)

Only after a few weeks of being claimed and an incident that tested their connection which she dealt with the “Katarina ways,” (non reactive, dignified, softened boundaries) he asked her to move in!

I dealt with her dilemma of finding out her new bf was still prowling the dating site and she was so shocked my non-reactive approach that I advised her with and the one that she practiced made him even more putty in her hands (week 3). He was not only boiled but cooked for life!

These Five Weekly 2 hr Teleclasses are the replays of our first cycle that commenced on March 30, 2014. During the program my client Chrissy’s boyfriend popped the question and you will understand why after listening to these classes.

Overall this program has given birth to three engagements (with another one not yet official).

Dina was also in the program and she asked a question about her boyfriend having been acting hot and cold and the drama surrounding his ex (week 3). They broke up not long after the program, she applied all my principles dealing with men, two weeks later he had to claim her back cause he realized there was no way he could a rare woman like her go!

Get this program and really understand the core principles of my miraculous method that gets all these women reeling with excitement and amazement and all these guys melted beyond shape.

For only $399 or $499 this program will jumpstart your love life or move it to the NEXT LEVEL. These are four components of melting a man’s heart that I teach all my clients without which your relationship will remain STAGNANT and/or volatile and with which their men become so madly in love with them that they step up to the plate WITHOUT URGING or NUDGING:

Trust inspires a man to rise to the occasion. He feels accepted and connected to you as the result. This class will explore how to trust him anyway even when you are feeling shaky inside. Without trust your relationship will crumble in no time.

How to encourage good behaviors that get you more good behaviors and how to overcome your displeasure of things that bother you by shifting your perspective, and thus energy.

How to be comfortable in the feminine role of following a man’s lead and respond in a feminine way when you disagree with him and need to veto his decision.

Week 4: Communicating to him

in a non-verbal way that he understands and appreciates when words have fallen on deaf ears. Learn the secret of why and how men would listen to you. Women often follow generic advice out there on how to communicate with guys that do more damage than helping them getting what they want. This class will reverse that.

Week 5: Bonus Session in which I deal with your questions

This is an E-Product, which means it’s downloaded to your computer or gadget after your payment is processed (You will receive an email containing your login information). No physical product will be sent to you through mail. All sales are FINAL. Please refer to Terms Of Use for further illumination on our terms and conditions and refund policy. You can contact us at support@katarinaphang.com (but please BEWARE: you will need to click on the one-time anti-spam verification link to whitelist your email address, or your email won’t reach us) if you have a problem downloading and we will respond to you within 24 hours.

He wants us to move in together and asked me last night over dinner if I see him being my husband!! I almost choked on my plate!! His words, few nights a week and the weekend are not enough for me! I need the day to day interaction with you!

I will post, the prior events leading up to this!! What a weekend!! Woke up to this man staring at me…then said I love you so much, you are so beautiful!! Blushing!! — feeling excited.

I said, yes and yes to both…I suggested that we wait till the end of the year to however ( with my lease and I have a son as well.) He is so great with him too…you can see the difference, how my son interacts with him as oppose to me ( it’s like I’m a joke.) I told him to that I love how strong he is and I know he will leads us well!! He was over the moon with that comment…men they love to hear how much you appreciate them and their masculinity!!

It was a lot this weekend…him asking me all those questions: marriage, babies ( he said we have one already, so only two more to go!!) My heart melted when he referred to my son that way!! Then ask, if I would be ok with living in NJ!

And Katarina Phang MY ROI (return on investment) keeps giving even in what we thought was the most amazing sex….our loving making has reached the pinnacle!!

I love you Kat hehehe…my “glad bag can’t take it anymore!!” This morning we were running late, I had a big meeting and he said hon go ahead, I’ll lock up and be on the next train.

So I have completely leaned back since my bf and I of 2 1/2 years split up two weeks ago. I took down all of our pictures I started an online dating account on tinder and I have not contacted him even once since our split. I must say miracles are happening.

He has contacted me every day. Has randomly appeared at my house at my work and he still has all of our pictures up at home and work.

I went out on a date with a guy who I find mildly interesting. He is an Airforce Officer with his PhD. We have gone out twice now. Both times while on my date my ex bf was truly wigging out. Blowing up my phone and having his friends call me also. I ignored them and tried to enjoy my dates.

Saturday night was a turning point I feel. My ex bf called and left a message how much he loves me. He slept in his truck in my parking lot waiting for me to get home. He told me this morning he had to see me to hold me and talk. I went over to his house for breakfast and we snuggled and he said he never realized how it feels to be without me. He doesn’t like it. He told me he will be talking to his son this week with some heart to heart conversations about how he loves me and wants me in his life.

He is traveling on two trips without me in the next few weeks due to his sons tempter tantrums about me going. My ex bf said it is his hope that I can travel with them in July. He has decided to tell his son I am coming in that trip no matter what…even if his son chooses not to go then so be it. While this doesn’t fix the next few weeks it feels like a pretty huge step in the right direction. We are still broken up I guess. It is all a little confusing though because we were intimate today for the first time since our split.

Anyway it’s amazing the transformation that seems to be happening. I feel I have my personal power back and it seems he is beginning to recognize my worth. Thanks for the life changing lessons Katarina Phang! I am sensing a shift in his actions and it feels really good. I love him and I feel in the past I was ahead of him in where our relationship was going.

Now I have truly softened my boundaries and I mirror his actions. It feels good. I will keep you all posted on the outcome. Today we planted a garden together and it was very intimate and romantic in an earthy kind of way.